Divisions in America reach far beyond Washington into the nation’s culture, economy and social fabric, and the polarization began long before the rise of President Donald Trump, a new Wall Street Journal/NBC News survey of social trends has found.

The findings help explain why political divisions are now especially hard to bridge. People who identify with either party increasingly disagree not just on policy; they inhabit separate worlds of differing social and cultural values and even see their economic outlook through a partisan lens.

The wide gulf is visible in an array of issues and attitudes: Democrats are twice as likely to say they never go to church as are Republicans, and they are eight times as likely to favor action on climate change. One-third of Republicans say they support the National Rifle Association, while just 4% of Democrats do. More than three-quarters of Democrats, but less than one-third of Republicans, said they felt comfortable with societal changes that have made the U.S. more diverse. 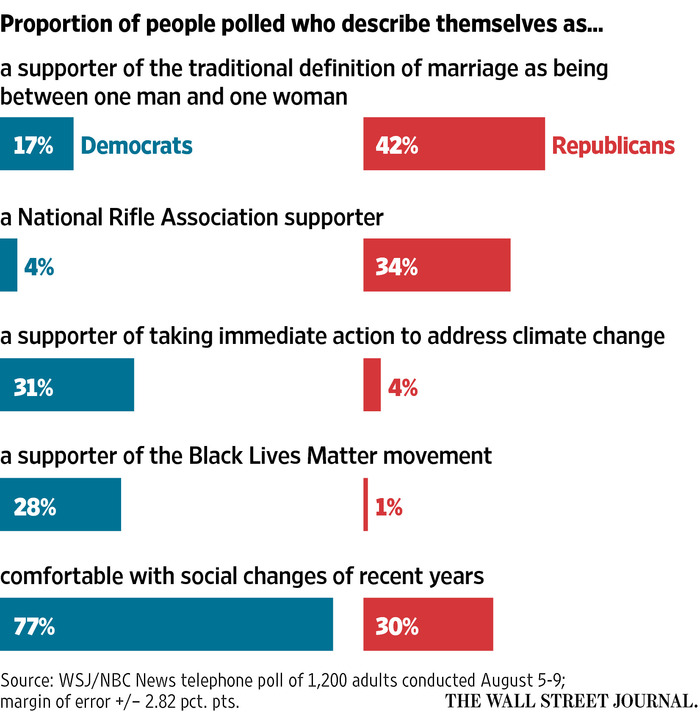 What is more, Americans’ view of the economy, the direction of the nation and the future has even come to be closely aligned with their feelings about the current president, the survey found.

“Our political compass is totally dominating our economic and world views about the country,” said GOP pollster Bill McInturff, who conducted the survey with Democratic pollster Fred Yang. “Political polarization is not a new thing. The level under Trump is the logical outcome of a generation-long trend.”

The poll found deep splits along geographic and educational lines. Rural Americans and people without a four-year college degree are notably more pessimistic about the economy and more conservative on social issues. Those groups make up an increasingly large share of the GOP.

Under Mr. Trump, that trend has continued and intensified. His job-approval rating among Americans overall has remained in recent months at about 40%, but just 8% of Democrats approve of the job he is doing, the survey found. By contrast, 80% of Republicans approve.

Mr. Trump’s election has brought a sharp mood swing among Republicans. In August 2014, 88% of Republicans said they weren’t confident that life for their children’s generation would be better than their own, a gloomy view of a central element of the American dream. Eight months into the Trump presidency, just 46% of Republicans say they lack confidence in their children’s future—a 42-point swing that is more dramatic than improvements in the economy would seem to justify.

The survey found changes over the years in attitudes on cultural and economic issues, such as gun control, immigration and globalization, that were key issues of Mr. Trump’s campaign. 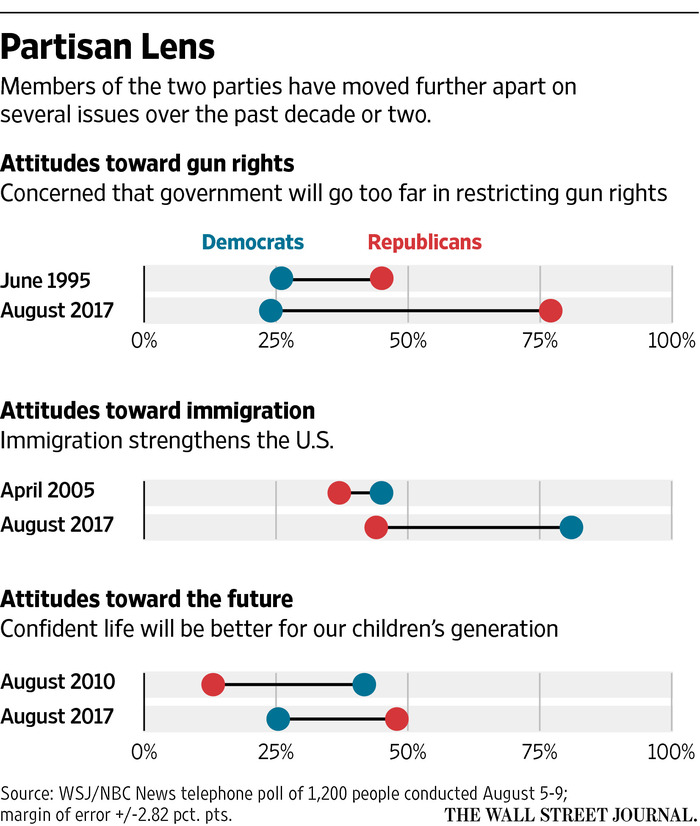